This is a preliminary version of my research design for the course game studies.

“…one of the sweetest pleasures as a game designer is seeing your game played in ways that you did not anticipate.” (Salen & Zimmerman, 2003 p. 540).

The cause for this research is my personal experience with the First-Person Shooter (FPS) game Halo on the Xbox console platform in a social group. The research is about the social renegotiation of the game rules. The research restricts itself to a specific way the game Halo can be played, namely multiplayer competitive gameplay. More specifically, the team-based Capture The Flag (CTF) gametype within a Local Area Network (LAN) context. Furthermore, the research only considers gameplay in the map ‘Sidewinder’.

The design of the game offers users the possibility to adapt the game rules. However, not al elements of the game are modifiable. This means that users would like to change them but are unable, which leads them to other creative solutions. This was the case with the group of people who are interviewed for this research. Thus, this research is about the motivation of the game players in changing the game rules without actually changing game elements.

The paragraphs above contain terms, such as FPS, CTF and LAN, some of which may seem rather exotic to the reader who is unfamiliar with them. Basic knowledge about these concepts is required for the reader in order to understand this paper. However, it is beyond the scope of this paper to review these concepts extensively. Therefore, I refer the reader who is unfamiliar with a concept to the Appendix, where I provide a short description of each term.

1. What is the motivation of game players in redefining the rules of the game Halo?

The question is broken down in the following sub-questions:

1a. Why were the game rules offered by the designers not followed?

1b. What was the goal of changing the rules?

1c. What did the process of changing the rules look like?

1d. What was the result of changing the rules?

The research can be classified as participation research. It concerns two concepts, namely game ‘design’ and ‘games as a social phenomenon’, after two chapter titles in the “Handbook of Computer Game Studies” by Raessens & Goldstein (2005).

Within ‘games as a social phenomenon’ the concept of participatory culture is relevant for this research. Thus, I will employ the framework of “participation” (Raessens & Goldstein, 2005 pp. 378-381). This framework consists of three domains, namely; interpretation, reconfiguration and construction. Game rules are related to the construction part of the framework. Within ‘construction’ one can discern ‘modification’ and ‘creation’. The phenomenon of changing the rules is best described using ‘modification’.

Raessens says that he adheres to “technological interactionism” (p. 379) and I follow him in this regard. Here, social processes are influenced by technological developments as well as human negotations. This means that I will take into account both the negotiation of rules in a group setting, as well as the (re)configuration of the game elements.

The research concerns a case study. The research method used in this study is qualitative fieldresearch. More specifically, participatory ethnography, since the researcher participated in the group himself. The analysis is based on semi-structured interviews with a sample of respondents from the group of players. The interviews were conducted by means of Skype voice-over-IP telephony. The answers provided form the basis on which I can answer the research question.

The respondents were selected from the group in question. This group varied in size between 12 and 16 people who played together on a regular basis. The sample size is [n=???????]. The respondents were sampled based on their frequency of play, i.e. they were the most frequent players of the group.

Value of the research

The research is valuable for both academics as well as game designers, because it provides insights into what game players demand from the rules of the game and the opportunity to change these rules. The goal is to produce games that appeal even more to game players.The FPS-genre is at this time still very popular, with recent releases regarding the Call of Duty and Medal of Honor franchises. Although the research concerns a case study, Halo can be considered a typical FPS game. This speaks in favor of the generalizability of the research within the FPS-genre.

Limitations of the research

The research provides in-depth insights on a relatively ‘small’ area, since it concerns a very specific combination of peripherals, software and people. Thus, the results might be hard to generalise, at least beyond the FPS-genre. This is due to the unicity and specificity of the case and its situation within the context.

It can be argued that the participation of the researcher in the group is a weakness, because it may cause bias. Therefore, issues such as interpretation and personal factors may lead to different results when replicating the research. To complicate matters, replicating this type of research is difficult in itself, due to situational circumstances.

The group in which the researcher participated played together between 2003 and 2006. At this the researcher had no intent of doing research, so he participated on an equal basis with the other participants. Therefore, there was no role stress of being participant and researcher at the same time. However, this brings the potential disadvantage of ‘going native’. Furthermore, data collection took place in 2010, about four years after the group stopped playing on a regular basis. This period between the events and the collection and analysis may have negative effects, such as respondent’s diminished ability to recall events from their memory.

Capture the Flag is ”…a special mode usually found in multiplayer games, where two teams will engage in battle and try to take the opponent’s flag in order to bring it back to their own base, while protecting their own flag.” (Gaming Dictionary, 2011).

The console is “…an entertainment system, portable or not, which lets you play video games.” . This research concerns the Xbox console.

This type of interface in Halo looks like: http://hce.halomaps.org/images/files/lg/13screensh13135ot00.jpg

Halo is “…a first-person shooter with considerable driving elements and the first game in the popular Halo series… Halo also has a significant multiplayer component with …capture the flag with the unusual addition that the flag takes your weapon spot while you are holding it, so shooting your way in and out of the base on your own is not an option … There is also a game editor which allows you to set custom rules for all the basic game types. All the playable weapons and vehicles from the campaign mode are available in the multiplayer maps with the ability for members of the same team to share the game’s distinctive Warthog vehicle, which is essentially a small truck with a mounted gun on the back.” (MobyGames, 2011).

LAN abbreviates the descriptive term Local Area Network. Such as network connects computers in a common location (Gaming Dictionary, 2011). Here, the network consists of four Xbox consoles located in a house, often in two rooms due to the divide of the group into two competing teams.

The map is the “…game universe you are in when you play a game.” (Gaming Dictionary, 2011). This research is limited to one specific map called ‘Sidewinder’.

This research concerns multiplayer gameplay. This means “…a video game that can be played by a few players … over a network, over the Internet, or in a LAN.” (Gaming Dictionary, 2011). Halo allows a total number of 16 players to play at the same time in the map Sidewinder.

Peripherals are “…hardware (as opposed to software) extension … device[s] used in computer science, like a mouse…” (Gaming Dictionary, 2011). Example of peripheral devices in relation to the Xbox console are the controller, network cables and the network hub/switch.

Sidewinder is one of the 13 available multiplayer maps of the game Halo. From a bird’s eye perspective the map resembles a horseshoe. “The main feature of this map is the ice patches on the front of the horseshoe in between the bases… On the outer edge of the map are two large cliffs that are connected to each base with teleporters. … On the inner edge, there is a network of tunnels which lead to the opposing bases. Four power-ups can be found in the lower section of the tunnel. There is a Sniper Rifle, two Shotguns, Health Pack, Plasma Pistol, Pistol and an Assault Rifle inside each base.” (Halopedia, 2011).

From a bird’s eye perspective, the map Sidewinder looks like this: 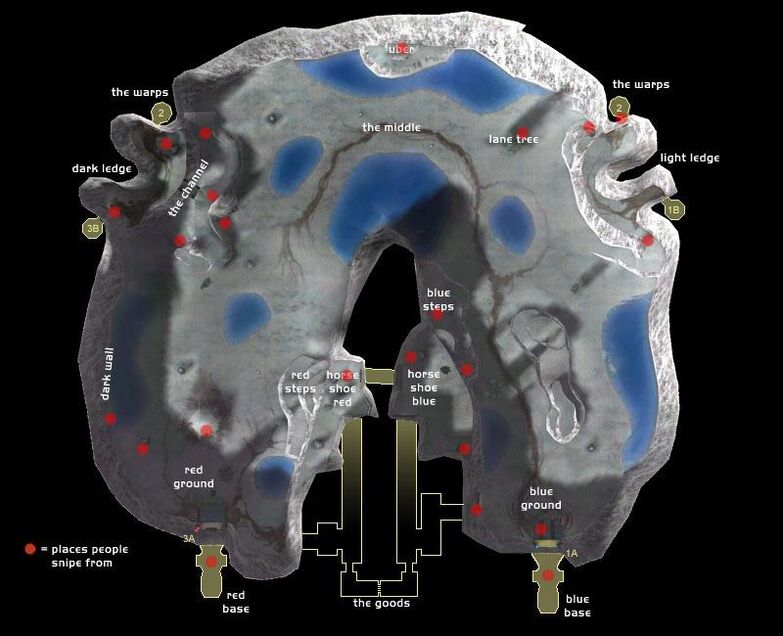